Vice President Kembo Mohadi has denied ownership of audios circulating all over social media of him arranging for sexual activities with different women saying the evidence are false and well acted.

Speaking during a press conference today, the Vice President said the allegations are just meant to destroy his image.

“The allegations levelled against me are not only false, but well choreographed to demean and soil my image as a national leader and patriot in this country.”  He said.

According to a leaked audio discovered by an online publication, Zimlive, Vice President Mohadi was allegedly having sexual relations with a married woman by the name Chervaughn Choeni.

He was also said to be demanding sex from a young Bulawayo girl whom he offered to pay fees for at a local college. 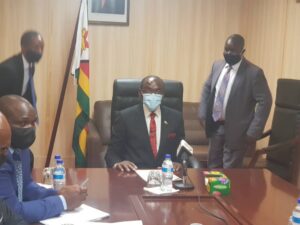