ZanuPF has distanced itself from errant motorists who are not obeying national regulations, using the party stickers as a shield against compliance to law enforcement authority.

It has been reported that there are many vehicles, mostly unregistered, bearing Zanu PF stickers and the party has urged law enforcement not to give any preference treatment to those motorists.

”We have received reports that party stickers are being used by criminals to extort and harass people who are going about their normal chores. We don’t condone such behavior. Its unacceptable, illegal, criminal and the party will act on such activities.” Mangwana posted on his twitter handle. 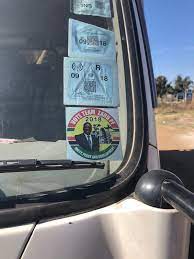 In a recent interview with the state paper, Zanu Pf Secretary For Administration Dr Obert Mpofu appealed to the public to report cases where people abuse the revolutionary party’s name.

”I am also appealing to Zimbabwe Republic Police ( ZRP) to impound any equipment or vehicle that is used in the name of Zanu Pf without really having to confirm with us . They should impound those vehicles especially those that are using Zanu PF stickers,” said Mpofu.