A 74 year old inmate at Hurungwe Prison Farm has refused rape allegations that landed him 15 years imprisonment in which two years were removed on good behavior.

In an interview after the media tour on production and rehabilitation at Hurungwe Prison Farm on Friday, Matheous Chemhondoro said allegations that he raped his 6 year old stepdaughter were false and he was framed by his wife.

The grandfather reiterated that his jail term was further reduced to 5 years when he was transferred from Chikurubi Maximum Prison to Hurungwe Prison Farm.

Chemhondoro further denied his rape charges adding that his medical conditions proved that he was not legible to sleep with a woman. 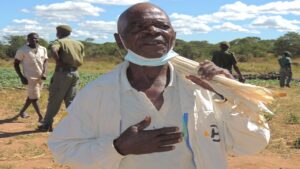 “I was convicted of rape. What happened is that l was framed. The rape case ashamed me because l was not guilty. My medical condition does not allow me to have sex with a women hence the sentence troubled me a lot.

“I was sentenced 15 years in jail and the magistrate removed 2 years and l remained with 13, then the jail removed another 5 and l was left with 8 years and 8 moths jail term dry, however Tilda Moyo came when l was imprisoned at Chikurubi Maximum Prison and from there l was transferred to Hurungwe Prison Farm and fortunately my jail term was finally reduced to 5 years.” Said Chemhondoro.

The 74 year old grandfather narrated the events that led to his arrest and conviction.

He said that what happened is that he took his step son from Mutare so as to help as the son was facing financial problems. He then employed the son to a secretarial post at one of the prisoner’s businesses.

However the step son abused the post by stealing from people which gave Chemhondoro power to fire him.

Chemhondoro said that was what created a grudge between him and his wife which led him to be framed for rape.

“I took my step son and l gave him the post of a secretary but he stole a lot of things from the villagers including money and as a result l ousted him from the secretariat position and replaced him with someone. In Addition my step son had a wife and there was another man who came and wanted to have a relationship with my step son’s wife and l was able to figure it out on time and l confronted my wife on that issue and that is where the dispute came that led me to be framed for rape.” He added. 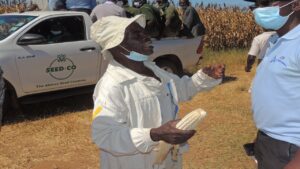 Despite the rape charges, Chemhondoro hailed the Officers at Hurungwe Prison Farm for their good supervision.

“We are very happy with the farming activities that are done at Hurungwe Prison Farm. At first we want  to thank the authorities of Hurungwe Prison Farm and secondly we want to thank the officers who supervise us and all the staff members here at large. They are using these fertile soils enough and we are living in good conditions, the officers don’t beat us.” He said.

Hurungwe Prison Farm is an amalgamation of three farms with a total of 1 729hectares out of which 1000 hectares being potential arable land.

Gumbura To Continue Staying In Prison