Female prisoners have been awarded with more freedom inside as the government yesterday opened a first ever Female Open Prison in Marondera.

This came following an establishment of a male open prison at Connemara in the midlands province in the year 2000. 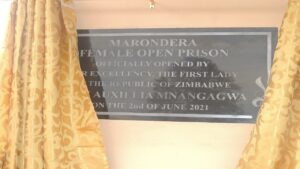 “It is important to appreciate that women are by nature care givers in families and communities at large hence the idea of establishing such a facility that enhances, promotes and bounds relationships with respective families. I want to accept that inspite of such a critical role, women have been permitted to benefit from this preferential package of privileges.

“This has necessitated our zeal to extend a special treatment to female inmates that see us bringing on board a female open prison institution here in Marondera.” CG Chihobvu said.

CG Chihobvu said the open prison offers freedom to prisoners unlike in a closed prison. Inmates at an open prison are presented with opportunities to go on home leave, they are allowed interactive time with their families and they are also allowed to go on vocational tertiary centers and pursue different dreams. 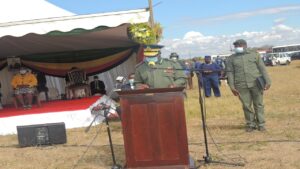 Meanwhile, Acting Communications officer incharge at Conmara Open Prison, Chief Correctional Officer, Gwauya Mutuke during media a side interview responding to a question on whether the inmates who are given this much freedom may sometimes never return to the prison, agreed that it sometimes happens but the inmate will then lost a chance to be ever awarded such freedom.

“Yes it so happens in prison, you know we are dealing with human beings here whose minds we may never read. So the process of selecting under the panel which was appointed by the commissioner general himself assist and identify what we call potential which gives freedom to those whom we feel have qualified according to our criteria. Yes some have run away but it is a disadvantage to them for they will no longer enjoy open prison advantages when we catch them.” Officer Mutuke said.

He added that the prisoners are then given 72 hours to return to the prison and if they fail, they will then be regarded as escapees.

“So when that happens, we give an inmate 72 hours to come back to prison. During that same period, you are not regarded as an escapee, you are considered as an absconder and after 3 days of failing to report, will then declare you an escapee and then we will report you to the police.” He added.