Minister of Information, Publicity and Broadcasting Services has issued a statement concerning the video that circulated on social media yesterday concerning police officers who throw teargases in a Zupco bus occupied with people.

In the video, a yellow Rimbi Tours Zupco bus can be seen surrounded by the police, some throwing tear gases inside the bus. It’s a horrifying scene as the bus is then seen filled with smoke and some passengers escaping the bus through windows risking their lives.

In a statement, the ministry said the police who suffocated the innocent passengers were arrested and will face charges.

“Government has been made aware of an incident at Harare Showgrounds where a team of 7 officers have been arrested for deploying tear smoke in an occupied bus.

“They will face charges,” the statement said.

Meanwhile, the statement  said the bus was being driven by a “tout.”

“The crew of the bus has also been arrested as the bus in question was being driven by a tout.” They said. 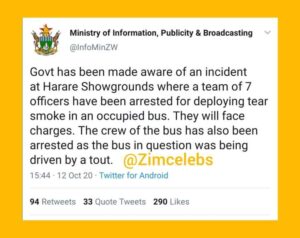 UK and Zim In Economic Partnership

Deputy minister of transport and infrastructural development, honorable Mike Madiro says the government through the help of the Chinese is…