Permanent Secretary in the Ministry of Primary and Secondary Education on October 15 drafted a proposal concerning procedures to be taken when increasing school fees.

This came following complains from parents and SDGs that school fees that are being demanded in schools since schools opened in September is too much.

The Ministry of education however said, the National fees committee studied and considered a variety of proposals put forward by School Authorities and school development committees (SDGs) to justify fees and levies increases and came out with a way forward.

They said school fees should be increased using the USD rate against the rtgs that was there during the first term when schools closed following the corona virus lockdown.

“After the due process the National Fees Committee applied the formula to try and rationalize the fees and levy increase for viable operation at schools in the mean time.”

Most schools in high density areas were increasing school fees using the current rate of US1:ZW 80 and most are charging fees ranging from 30 t0 35 USD.

Below is an extract from the ministry of education explaining the school fees formula: 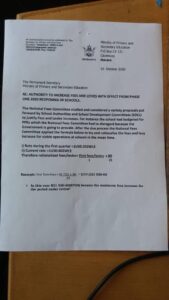 Schools opened for examination classes on September 28 and the second phase opened on October 26 where grade six, form 3 and form 5 returned to school.

The rest will return to school on November 9.

Teachers Not Backing down