Photos of  two young men who were allegedly beaten up by soldiers last Sunday are ragging all over social media with many people viewing the incident as a human rights violation.

The young men, Taku Mundenga and Perfectt Khumalo were allegedly attacked by three soldiers when they were conducting prayers on a mountain in Harare.

Posting on his facebook page, Taku Mundega said, on 13 December 2020 he went to his usual prayer point with his friend around 4pm when the were ambushed by three soldiers.

He said, “Unexpectedly, I heard the breaking of twigs as three uniformed soldiers emerged from behind the bushes. The formation with which they were advancing towards us told me something was off. One of them was swinging sparkly handcuffs in his hand, while the second one was busy unwinding a rubber sjambok (mboma) and the third military officer was not armed. Unfazed, I continued expounding my point about Christ as the trio marched closer. It then dawned upon my intelligence that these men might have been tailing or ambushing us but what could they possibly do to unarmed civilians looking for God?

I was wrong. “Hello, boys, what are you doing here?” One of the soldiers inquired. “We are here to pray, Sir,” I responded. “Why here?”He asked. “Because it’s a convenient place without noise or other disturbances,” I fearlessly replied. “Come, sit here!” The soldier holding a sjambok yelled. Like sheep, we hoisted ourselves down to the spot he had designated. Suddenly, we were ordered to empty our pockets and put our cellphones away from us. “Manje, chibvisai hembe murare pasi makabatana uye makatarisa pasi!” [Now, remove your shirts and lay facedown close to each other!] He snarled again. 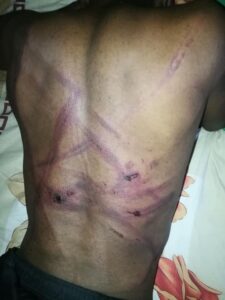 “Jesus died for you and it’s now time to die for him,” the officer continued. “Say, Jesus, I am dying for you!” We recurrently repeated his words as the whip went up and down our naked backs. Seeing their determination it reminded me of how the Pharisees mercilessly tortured the character of Jesus as portrayed in the passion play. We squirmed, screamed and groaned but our voices could not be heard anymore. These men were certainly on a mission to kill and to destroy. The whips could be felt smacking and shaking the ribs. “Your Jesus got you in trouble, today,” they repeatedly said those words and two soldiers took turns on us. 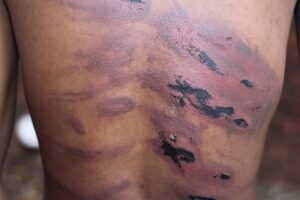 This incident among others has portrayed our country as a breed for human rights violations as these photos went viral all over social media.

The Zimbabwe Republic Police (ZRP) says they will enforce Chiwenga’s revised Covid-19 regulations “without fear or favour.” In a statement…