Teachers say the government should adopt and implement a safe schools policy in order to protect teachers and learners as their safety is a cause of serious concern.

Federation of Zimbabwe Educators Union (FOZEU) posted on their twitter handle that one of their teachers at Mangorohwe Primary School In Gokwe almost lost her life after being attacked by a villager.

”The safety of teachers in schools is a cause of concern. At Mangorohwe Primary in Gokwe one of our teachers almost lost her life after being attacked by a villager. Government should adopt and implement a safe schools policy to protect our teachers and learners.” The post reads. 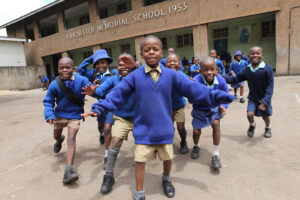 ”We read of salary adjustmests,@ProffPMavima this is our response. Tell Mthuli Ncube to invest in education to Save Our Education. Time is not on your side. A national Uprising is brewing.”

”We also read of Minister Mathema’s reckless utterances. He declared a ”No Work No Pay” policy. Our response to the boss @MoPSEZim is here. Those ruling know that an uprising is brewing, millions will rise to save our education.” They said on twitter.

Zimbabwe’s 120,000 teachers are still demanding salaries equivalent to US$520. They  rejected a 40 percent salary increase announced by the government saying its a mockery. The pay increase saw teachers’ salaries go up from Z$3,500 to about Z$5,000 (US$61).

Zimbabwean teachers are demanding for a better salary and safety for teachers and learners.