Zimbabwe Republic Police (ZRP) is currently conducting investigatings about a case where three people were recently found dead near Bata Farm in Bindura.

It was reported that the three bodies were found less than seven meters from a dam and were found with several items including money and cellphones.

”Yes, three people were found dead at Bata farm yesterday, they were near a Honda CRV vehicle ABR 6239.” He said. 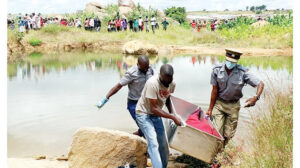 He reported on where the bodies were found.

Nyati added that, ZRP is currently conducting investigations to establish the owner of the car.

He reported that, several items were found with the deceased that include money and cellphones.

Teachers Call For Safety In Schools

Road Port To Be Constructed In Masvingo