Popular social media socialite, Hell Commander, real name Trevor Mbizo says he will marry Njuzu despite the fights they are having.

The controversial couple of the moment have been causing chaos on social media after Hell Commander was caught on Instagram flirting with a lady.

The situation then resulted in Njuzu cutting communication with the Hell Commander last week Friday.

This then drove the couple’s critics to share their views concerning the issue.

Some are saying due to the nature of how their relationship started, it will not last.

Some added that the two serial love cheaters connected and there is absolutely no way it will ever work.

However, responding to all the critics by different people on social media, Hell Commander made it clear that he was very much in love with Njuzu and would marry her to prove people wrong. 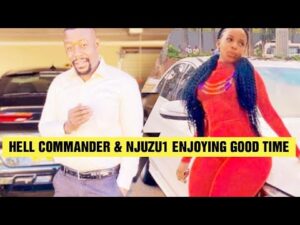 He declared that their relationship is going to last.