The Environmental Management Agency (EMA) has today launched the National Fire Week which is meant to raise awareness amongst communities on the need to prevent veld fires.

The launch was officiated by the Minister of Environment, Climate, Tourism and Hospitality Industry, Hon Nqobizitha Mangaliso Ndhlovu.

The Minister urged farmers to protect the expected bumper harvest by protecting it from veld fires.

“The country’s agricultural yield projection for the 2020/21 season indicates a bumper harvest, one of its kind in 37 years, which we should all celebrate and judiciously protect.

“As we all celebrate the projection of a good national crop yield, we should however, be cognisant of the environmental factors which dominate our landscapes and it is not yet time to relax. We should therefore all work together to prevent catastrophic losses to our harvest from veld fires.” He said.

The veld fire season in Zimbabwe stretches from 31 July to 31 October each year.

Minister Ndhlovu said the country is at risk of encountering veld fires because of the heavy rains that the country received in the last rainy season.

“Following the heavy rains we received, there is high biomass even in areas that traditionally have low biomas implying that, the  country  is highly vulnerable to veld fires in the 2021 fire season.” He said.

The Minister urged the community to always be on the lookout for any fire outbreaks.

“As such, l have also decided to add my voice to the awareness drive, now that we are in the National Fire Week Awareness, by encouraging all citizens to start now putting fire preventive measures before the onset of the fire season, and also remain on the lookout for any fire outbreaks during the entire fire season.”

The launch was also graced by the Deputy Minister of Lands, Agriculture, Fisheries, Water and Rural Resettlement, Hon Douglas Karoro.

The Deputy Minister urged farmers and everyone in the community to guard against veld fires as the country is expecting a record breaking bumper harvest.

” This year our country is expecting over 3,7 Million tans of cereals. This is a record harvest in many years and signals the rising of our agriculture.

“The Ministry of lands, Agriculture, Fisheries, Water and Rural Resettlement considers veld fires a threat to food security, particularly the bumper harvest that we are all expecting. We must all say no to veld fires. Lets all do all we can to avoid veld fires.” He said. 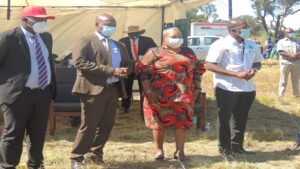 Every year, the second week of May is set aside for education and awareness raising on the dangers associated with veld fires and therein strategies for their prevention and this year’s national fire week launch was commemorated under the theme: Veld Fires and Food Security – Protect the harvest.

Gvt To Mordenise Agriculture During The Summer Cropping Season

by Yeukai Chidemo May 13, 2021
Agriculture, Environment and Climate

by Yeukai Chidemo May 3, 2021
Agriculture, Crime and Courts

ZRP Urges Farmers To Travel During The Day To Avoid Robberies