9 more illegal miners have reportedly been trapped this morning the 27th of November 2020, at Ran Mine in Bindura.

This follows hot on the heels of another accident at the same mine where more than 30 miners who were trapped on Wednesday afternoon.

According to eye witnesses at the scene, the gold-panners were mining on another side of Ran mine, when the tunnel collapsed on them.

“The tunnel collapsed on them as they worked to blast the area so as to retrieve ore. The rescuers are trying to help the victims by draining water from the underground tunnels.”  263times heard.

“The disused mine was originally opened by the Germans, who later left tunnels underground which have collected water and become rivers. We also know that there are underground rivers in the area beneath us.” An eye witness added.

However, Civil Protection Unit (CPU) director Mr Nathan Nkomo dismissed the news saying that it’s just social media talk. He said that the only miners trapped were the ones who were trapped on Wednesday as officially recorded.

He all but confirmed that the number of trapped miners is likely higher than previously thought as there is no real known figure. He denied today’s accident, saying that it’s not true.

“No it’s not true. As for me I rely on official information from the Provincial Development Coordinator for Mashonaland central province and other government agencies. I haven’t heard anything yet.” He said.

Meanwhile, Mr Nkomo said there is need for dialogue between CPU and the ministry of mines so as to come out with ways to avert illegal mining. He added that rescue efforts were ongoing and that authorities were de-watering the mine shafts.

“What we need to do is to ensure that procedures are followed in the mining sector, we need to come together with the ministry of mines and come up with a plan to avert all those issues. We need to ensure that certain rules and regulations are also imposed to avoid illegal mining.” He said.

The mine collapse comes weeks after six miners died in Esigodini, in the Matabeleland province of the country, while five others died in Chegutu when mines collapsed.

Last year 24 miners died at Battlefields, Kadoma, about 125km from Harare, when the shaft they were working was flooded following heavy rains.

Rescuers took five days to clear water from the mine shafts. Only one doctor was on site during the rescue operation.

The government has been criticised for failing to regulate mining activities in the country, and allowing companies to leave disused mines unguarded.

ZMF, a grouping of small-scale miners, says illegal mining has become a dangerous practice in the country. “We have lobbied the minister of mines to expedite formalisation and regularisation of the artisanal mining sector. Once these illegal miners have title, they will mine sustainably,” its president, Wellington Takavarasha, was quoted by the Guardian as saying.

“You never know how many are in the shaft, they use secret tunnels which is highly dangerous,” Takavarasha said.

Mining is a major contributor to the country’s economy with gold accounting for 60% of exports. However, smuggling of precious minerals is rife with reports that the Emirate City Dubai, imported USD$100M worth of gold from Zimbabwe in 2019. This however, does not match any official export records.

Recently Henrietta Rushwaya, the suspended president of the Zimbabwe Miners Federation was allegedly intercepted by authorities with 6kgs of refined gold at Robert Mugabe International Airport while trying to leave the country for Dubai. She is in custody awaiting trial on the charge of attempting to smuggle gold.

The gold sector provides work for nearly 10% of the country’s population, according to the International Crisis Group (ICG).

But the risky practice of illegal mining has been on the rise in the gold-rich country due to high levels of joblessness, exacerbated by a Covid-19 lockdown that has triggered a rush to the goldmines as families struggle under tough economic conditions.

Accidents caused by explosions and flooding are common in illegal mining, which is often carried out under dangerous conditions and with little regard for safety standards. 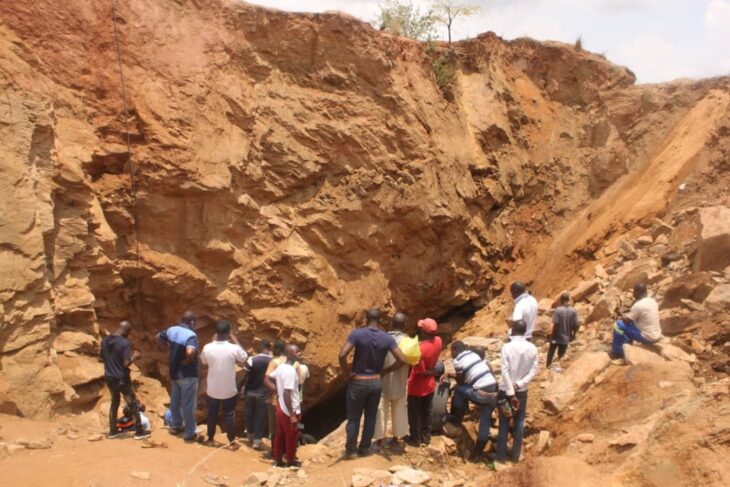 One More Dies In Bindura Mine Disaster

2 Bodies Retrieved At Bindura Ran Mine