Teachers’ representatives has described the government as a bullying and heartless employer and vowed that their members would not be forced to teach despite the threats to withhold their benefits.

The Primary and Secondary Education Minister, Cain Mathema yesterday told the state media that government was enhancing the no-work, no-pay principle for teachers who have not been reporting for duty since the beginning of this year’s term.

He said they are summoning the principle with immediate effect.

Meanwhile, teachers unions said they are unfazed by the governments threats and would continue with their strike demanding salaries between US$520 and US$550 or the equivalent in local currency. 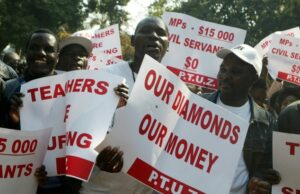 Amalgamated Rural Teachers Union of Zimbabwe President (ATUZ) Obert Masaraure posted on the union’s twitter handle that teachers are waiting for the day they will be capacitated.

”Incapacitated teachers will never be coerced to attend for duty, teachers are waiting for the day they will be capacitated.” He said.