Zimbabwean comedian and actress Tarisai Tyra Chikoko known as Madam Boss’ star in showbiz continues to shine after she was chosen to be part of the cast for Ubettina Wenthu, a forthcoming South African drama series.

It has been reported that, the latest development comes a few months after Madam Boss, who rose to fame through her social media skits, landed a role in a Nollywood series titled The Offspring, alongside Nollywood heavyweights such as Jide Kosoko and Ayo Adesanya.

While Madam Boss said she was busy on a photoshoot, South Africa-based Zimbabwean Bekezela “Becky” Dube, who is the founder of Becky Casting Agency confirmed the development to NewsDay Life & Style.

Becky, who facilitated the deal, reported that, Madam Boss was going to play the character Aminata, a foreign hairdresser.

“I realised that she (Madam Boss) is talented the first time I saw her Netflix video and being in a position of casting for any talent on television, I discovered that she was talented enough to be cast on any series in South Africa,” she said.

“It happened that I was casting a comedy series that also featured Madlela,

“I told them that she (Madam Boss) was the right person to be part of the cast.” She said.

Meanwhile, the socialite and actress Madam Boss is set to feature in another forthcoming Netflix series.

Becky reported that the shooting will take about three months.

“Madam Boss has got a huge role in another Netflix series that will take about three months.” Becky said. 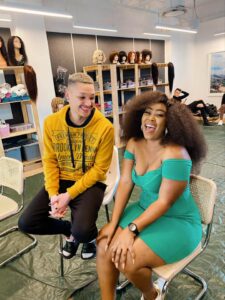