The late President and founding father of Zimbabwe, Robert Mugabe continues to divides the nation even beyond the grave.

The recent order by a traditional court that he should be exhumed from his burial place and be re -buried at the national shrine has been received with mixed emotions by the generality of the populace of Zimbabwe.

Zimbabwean took to social media to give their opinions to the issue with some saying this should be water under the bridge and that chief Zvimba should let sleeping dogs lie.

Some Zimbabweans have accused Chief Zvimba of violating the Zimbabwean culture as exhumation is not something that we as a people are used to while some said chief Zvimba’s court had summoned the wrong person in the late President’s widow, Grace Marufu Mugabe stating that culturally, Grace is not the head of house of where she is married hence the chief’s court ought to have summoned the males of the Gushungo’s clan or Mugabe’s household to which ironically Chief zvimba is said to belong.

According to our culture, the surviving male relatives of Mugabe are the ones who should shoulder the responsibility of any law suit that may be brought against him.

Innocent Matibiri, a nephew of Mugabe echoed this sentiment in an interview with City press adding that they as the males of the Mugabe family whenever summoned to the traditional court and when he tried to get into the said court he was denied entry. He said, anyone who had objections to the late long time ruler being buried in Zvimba should have raised those objections before he was buried.

“President Mugabe, Barbarians are at the gate. This sacrilege has to STOP forthwith. Some Rhodesian ex servicemen and mischief makers are behind this nonsense. When it comes to Bob, we won’t keep quite. We want the country to move forward and let’s respect the dead. He refused to be buried there and that’s it! Cadit quaestio!!!” Kasukuwere posted on twitter.

However, Kasukuwere’s post was bashed as many viewed his reaction as hypocritical considering the fact that himself and the late Mugabe did worse during their time in office.

Below are some of the replies from the people to Saviour Kasukuwere’s post:

“The new sheriff in town, perhaps, z doing it the Mugabe way….”the dead have no say on where they wanna be buried” Bob had this to say.

“This man and his family made us suffer, make him suffer until eternity. The cult doing what they do best 4p years on. Torment each other. Mugabe included.

“I suppose his ability to rid Mugabe of a constant thorn in the flesh in the form of Rex and also getting rid of Joyce Mujuru through proxies not forgetting his starring role in 2008 run off butchering of the opposition activists. Real credentials by Zanu standards.

“I’m against the exhumation of RGM homie or the vilification of his family but to be fair, it was Mugabe who perfected the art of forced burials at Heroes Acre. The name Welshman Mabena immediately comes to mind. How his brother Innocent was haunted by the CIO for standing up to RG.

“True, even Edgar “2-boy” Tekere is another example. Bob bulldozed his way against Tekere’s wishes. Even then, I’m of the opinion that the wishes of the dead, if reasonable, must be obeyed.

“No disrespect, but we have been walking naked a long time anyway, makes no difference to me even though I don’t agree. They did far much worse him and his goons.”

The other critic even included the following extract from file news to support his view: 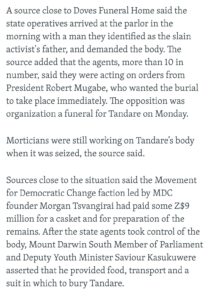 Mugabe Divides The Nation Even In Death

The late President and founding father of Zimbabwe, Robert Mugabe continues to divides the nation even beyond the grave. The…

Zimbabwe has continued to lead in the Southern Africa in procuring and distributing the Covid-19 vaccine. Zimbabwe started rolling out…