Founder of Econet Wireless, Strive Masiyiwa has spoken on rumour of British citizenship dismissing that he is not British but a Zimbabwean.

Responding to one of his Facebook followers by the name Joseph who had just congratulated him for being named first British black billionaire, Mr Masiyiwa clarified that he is Zimbabwean.

”Thank you, Joseph. Just one correction; I’m not British, I’m Zimbabwean. The article simply said the first black billionaire to live in Britain. There are many billionaires on the list who are residents of the UK, but not British citizens,

”To suggest that I’m British simply because on the list of a UK newspaper is the same as I’m an American since I have long appeared on the list of Forbes Magazine. ” The post reads. 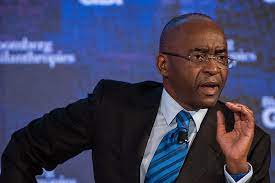 Masiyiwa’s wealth is estimated to be in billions, which has earned him the position as the first British black billionaire.

Zim To Host The 10th PAPU Conference In Vic Falls

Industries Request For Suspension Of The New SI