Addressing the media during a press conference in Harare today, Civic Society Convener, Taurai Mandishaya said Biti is an enemy of progress undermining the vision ”Zimbabwe is open for Business” to come into reality by threatening to block Zimbabwe fROM accessing any financial aid.

”Allow us to touch on the most senior saboteur of the economy of Zimbabwe, one Tendai Biti a lawyer, poitician, father and a terrorist,

”In 2018, he threatened to block Zimbabwe from accessing loans and grants from foreign institutions and nations.” Convener Mandishaya said. 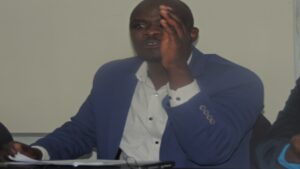 He added that Biti’s threats are of great consideration as they cause instability on business between Zimbabwe and potential investors.

”To prove the threat as reality, in 2019 when President ED was attending investors conference in Russia mainly to solve fuel shortages, violence erupted in Harare and Bulawayo. Fuel stations were the main target and in no time the word was made familiar to the news. Investors were given a second thought on whether to invest in Zimbabwe or not.” He said.

Mandishaya accused Biti of writing a letter to the world bank requesting that Zimbabwe should be excluded from benefiting from Covid-19 funds.

”Fast forward, to the time when Covid-19 started, the world bank listed countries to release funds, Tendai Biti wrote a letter to the world bank blocking them from aiding Zimbabwe. He succeeded, the fund was blocked which saw Zimbabweans hitting hard times. Other nations benefited and this is how the nation operate.

”The government and established institutions must investigate Tendai Biti in line with missing USD$ 3o million during the days he was the finance minister.” He said.

Deputy minister of transport and infrastructural development, honorable Mike Madiro says the government through the help of the Chinese is…